Washington, D.C.’s Georgetown neighborhood is a historic port town that predates the establishment of the federal district itself. It is home to an eclectic mix of art galleries, cafés, clothiers, boutiques, luxury hotels, fine restaurants, bookstores, foreign embassies, and a world-class university. The C&O Canal Towpath snakes through Georgetown almost unnoticed, yet nearly two hundred years ago, the canal was the pivotal launching point for executing George Washington’s vision to open up the western lands via a navigable alternative to the Potomac River. For much of the 19th century, Georgetown was a busy commercial hub for transferring imports and exports, including tobacco, sugar, flour, and coal.

Lively M Street boasts a vibrant nightlife and the Georgetown Waterfront Park features some of the most picturesque kayaking, running, and bicycling backdrops the city has to offer. The Francis Scott Key Memorial gathers tourists at a brownstone brick plaza covered by a limestone pergola, draped in wisteria. Many of the city’s finest historic brick and frame row houses line quiet side streets.

The neighborhood showcases famous federalist architecture and 19th century mansions. The Old Stone House, dating to 1765, is the oldest standing building in the city. The Dumbarton House, erected in 1799, contains rotating exhibits of household furnishings, art, and décor from the federalist period. And Tudor Place, built by Martha Washington’s granddaughter in 1816, is home to the extensive Mt. Vernon collection.

West of Georgetown is Great Falls Park, through which the Potomac River rumbles and roars over a chain of tumbling waterfalls, visible from a series of splendid overlooks and footpaths.  Farther west is the Seneca Creek Aqueduct, with its red sandstone arches and matching lockhouse.

The closest parking lot to Mile Zero of the C&O Canal Towpath is off Virginia Avenue, just a stone’s throw from Thompson Boat House.  You’re more likely to find parking in one of the municipal or private parking garages along M Street itself. 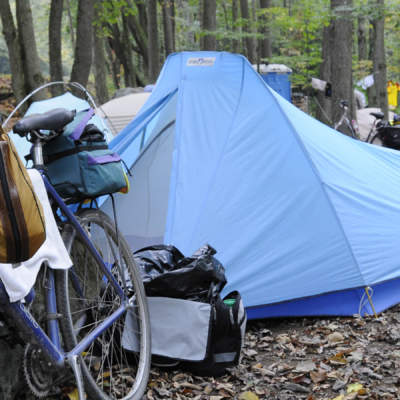