Homestead, and its contiguous neighboring communities, Munhall and West Homestead, were built on the steelmaking and machining industries, the best known of which was the Homestead Steel Works, a sprawling campus of manufacturing might that was fed by the region’s coal resources and bolstered by extensive railroad and river access. Scaled up by U.S. Steel for most of the 20th century, largely on the backs of immigrant laborers and their descendants, it employed nearly 20,000 people during World War II. The 1892 Homestead Lockout and Strike – during the ownership of Andrew Carnegie – was among the first deadly management-labor disputes in American history, and ended only after Carnegie deployed armed guards and called in state militia.

In Homestead sits the Bost Building, the union headquarters throughout the strike, and now the visitor center for the Rivers of Steel National Heritage Area. Explore the exhibit space, or take a self-guided historical tour of the borough with one of their portable DVD players. Local restaurants, craft breweries, and bakeries dot the Eighth Avenue Historic District. The Carnegie Library of Homestead, in Munhall, built in 1896 and later endowed by Carnegie himself, is in the French Renaissance style and is located a few blocks away.

A section of the GAP in Munhall uses dedicated bike lanes to skirt a riverside manufacturing plant, and then passes by the Pump House, one of the Homestead Steel Works’ remaining buildings, well-worth a stop for a tour of its exhibits. Or pause at the adjacent labyrinth created by artist Lorraine Vullo as a place of reflection and remembrance. Today, The Waterfront’s restaurants and retailers span all three boroughs, and travelers can find hotels, grocers, and entertainment en route.

Towering high In West Homestead are seven brick venting stacks, one of the few remaining structures from the Homestead Steel Works, and once in place to equalize the internal and external temperatures of steel ingots before they were sent to the adjacent rolling mill. The Homestead Greys Bridge, under which the Great Allegheny Passage passes, now features banners honoring the Homestead Greys and Pittsburgh Crawfords, neighboring rival Negro League baseball clubs

A circular parking lot in The Waterfront development surrounds a vintage ladle car used by the Homestead Steel Works. The lot is tucked between TGI Friday’s and UNO Pizzeria & Grill. It holds about 10 vehicles. 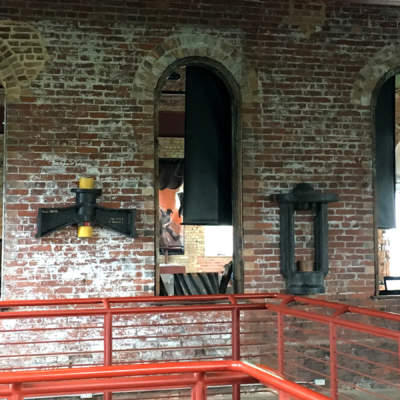 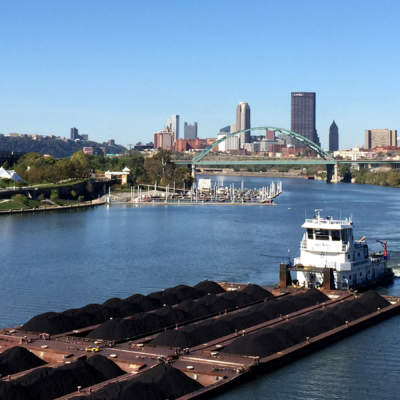