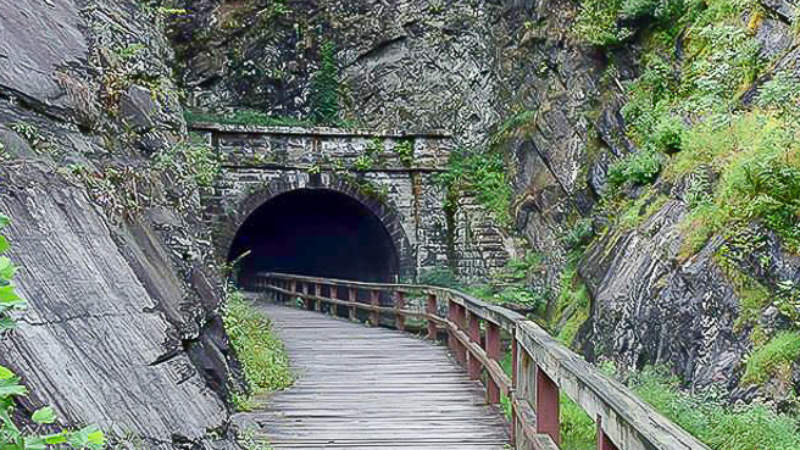 At 3,118 feet, the Paw Paw Tunnel is the longest man-made structure on the C&O Canal Towpath, and on the entire Pittsburgh-to-Washington, D.C. journey.  The towpath narrows inside the unlit tunnel, so it’s best for bicyclists to dismount and travel slowly.  The tunnel lining is made of over six million bricks that have stood the tests of time and weather since the tunnel’s opening in 1850.  While the western entrance has been modified, the eastern entrance remains as it looked when canal boats and mules approached from distant Little Orleans.  Today, the tunnel is a popular place for photographers due to the many original weep holes, rope burns, rub rails, and original brass plates that bring the tunnel’s history to life. Those on foot can hike back over the tunnel via the aptly-named Tunnel Hill Trail and see great views of the Potomac River.

Built between 1836 and 1850 to bypass five dramatic and cliff-laden horseshoe bends in the nearby Potomac River, the Paw Paw Tunnel was a magnificent feat of engineering for its time.  Carved by legions of immigrant laborers, it required dangerous pick-and-shovel handwork between regular black-powder blasts.  Workers removed over 200,000 cubic yards of material up and through vertical shafts as they inched their way forward.  Contentious labor disputes, slow progress (just 12 feet a week), a six-year work stoppage, worker injuries, a cholera epidemic, and mounting debt nearly bankrupted the developers, and even so, the project totalled close to $850,000, some 20 times the original budget.  When it was completed, the narrow width constricted canal boats to one “lane” of traffic, causing conflict between eastward and westward-bound vessels, sometimes resulting in fistfights and vandalism.  The tunnel was abandoned when the canal shut down in 1924.  The federal government purchased the tunnel in 1938, and performed significant rehabilitation in 1956, 1979, 2007, and 2018.

Paw Paw Tunnel is open dawn to dusk, year-round. Work is underway to stabilize rockslides at the eastern portal, so while the tunnel is open from the western side next to the parking lot and Paw Paw Campground, thru-travelers must use the Tunnel Hill Trail to go up and over.