The charming city of Connellsville sits just past the western edge of Ohiopyle State Park, and welcomes travelers seeking rest and replenishment. With a trailside hotel and several magnificent B&B’s, plus restaurants, a bike shop, and ice cream stops, it’s a favorite GAP stop.

In the 19th and 20th centuries, because of the presence of the Connellsville Coalfield – part of the most extensive, purest metallurgical sources of coal in the United States – coal mining and coke manufacturing fueled Connellsville’s economy, and the city once boasted more millionaires than any city its size. A score of Victorian mansions and soaring churches recall that era.  The Italianate Carnegie Library of Connellsville, built in 1903, is on the National Register of Historic Places.

A side trip using Crawford Street yields a great tour of public murals and the Connellsville Canteen, which showcases the lives of local veterans and features a model train exhibit. Follow the Connellsville Bike Loop for a neighborhood tour (green signs) or the business district (purple signs).

Amtrak’s Capitol Limited serves Connellsville with a regular train to Cumberland, Harpers Ferry, and Washington, D.C. and one to Downtown Pittsburgh, Cleveland, and Chicago.

Along the GAP west of town travelers pass beneath the Connellsville Gateway Arch, a colorful 14-foot creation designed and built by artist Steven Fiscus which features stained glass made in the town’s own Youghiogheny Opalescent Glass Factory.

Within a mile east of town, travelers cross the Bowest Bridge into Ohiopyle State Park and its deep canopy of trees and ethereal waterfalls.

A segment of the Sheepskin Trail connects to the GAP east of Connellsville, and eventually will proceed to Uniontown and points south.

Several remaining Connellsville Coke Ovens sit on the hillside above the GAP a few miles west of town, and are vestiges of the region’s industrial past.

The Connellsville Hiker-Biker Campground features lean-tos on a grassy knoll and is a great place for an overnight stop.

During the French and Indian War, British General Edward Braddock bivouacked at Connellsville with his men – including young aide-de-camp George Washington – before their fateful march toward Fort Duquesne. Local history buffs reenact the Annual Braddock’s Crossing of the Yough each June.

Parking is available in a paved lot at the end of Front Street, adjacent to Yough River Park.  An alternate option is behind Martin’s grocery store off of Vanderbilt Road, next to the Connellsville Hiker-Biker Campground. 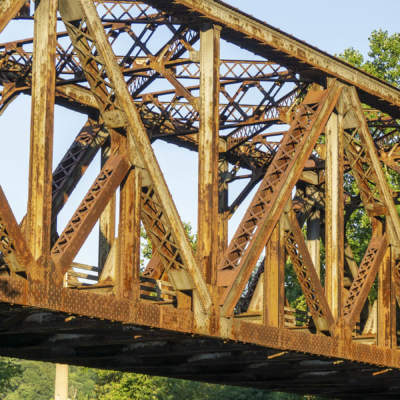 Plan your perfect stay in Connellsville at this highly rated, restful stop, serving travelers on the GAP since 2010. A perfect overnight and launching pad for the Laurel Highlands, right on the Great Allegheny Passage in Connellsville.